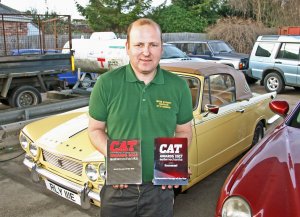 Huncote's Main Street Garage, was awarded Britain's prestigious "Small Garage of the Year 2016" title at the 2016 Car Accessory Trader Magazine Awards sponsored by Automechanika, against some very stiff national competition. The award was based on the opinions of the garage's customers as assessed by the national Good Garage Scheme and Car and Accessory Traders' judges.

Amazingly, Huncote's Garage triumphed again at the 2017 Car and Accessory Traders awards ceremony. Main Street Garage was acclaimed as Britain's best "Independent Garage of the Year 2017". Yet again the award was based on the opinions Submitted by its own customers of the service standards and quality of workmanship that Main Street Garage provides.

Simon Taylor, Main Street Garage's owner is delighted "It is a tremendous compliment to our staff and the investment in the most modern diagnostic and service equipment that the garage is now equipped with" he said. "As a village garage we try to be able to deal with all makes and models, including exotic sports cars, classics, 4 x 4's and many other items of equipment like mowers, vans, trailers etc. We know our customers personally and we know that they are our businesses' biggest asset" he continued.

Main Street Garage moved to its present premises 75 years ago, right in the middle of Huncote village, following the blitzing of its Leicester premises. Its very distinctive barrel roofed premises were originally built to house buses and charabancs. Simon took over the business 4 years ago, and celebrated their success in 2015 by winning the Award of Excellence for Garage Services of the Year 2015. "As a village garage we always strive to provide personal service in a personal manner. Nationally smaller garages are dying out, but we are proving that with the right investment and attitude they can not only survive, but succeed". Simon concluded "Here's to doing even better in 2018!".

Warm homes - A guide to staying warm this winter bit.ly/3tRHZIY